Sandra Bland Blues ( with a side of Cosby)

Memphis Earlene and I are on the Virtual Verandah with our beverages of choice–Southern Comfort for her & a Dark and Stormy for me to match my mood, because I still read the papers. Sandra Bland’s death at the hands of Texas style law enforcement is very much on my mind. 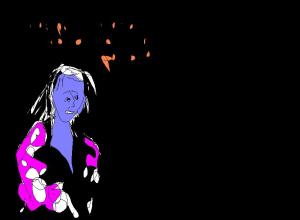 “I didn’t know you could be thrown into jail for failure to use your turn signal in Texas,” I say. “ In Virginia they just give you a ticket. At least that was my experience.”

“ Something real ugly about a bunch of guys in uniform, public servants, picking a fight with a woman. Telling her to put out her cigarette? That’s not proper law enforcement. Cop should have given her hell for bad driving and then write up the ticket–or better yet, let her off with a warning. She’s no physical threat. And even if she gives you a bit of lip, that’s no excuse for going postal. She’s a woman in a suit , not a gang banger.”

“And what about Bill Cosby?,” I say. “Why did he have to drug all those women? That’s the dating strategy of loser guys who couldn’t get lucky any other way.   You mean to tell me he didn’t have options?  ”

Memphis Earlene puts her hands over her ears.

As a disenchanted Woody Allen fan I can appreciate the trouble she’s having shifting gears.    But right now I’m not seeing much difference between Bill Cosby and those white Texas cops.

2 Responses to Sandra Bland Blues ( with a side of Cosby)