Blues for Beginners: The Book 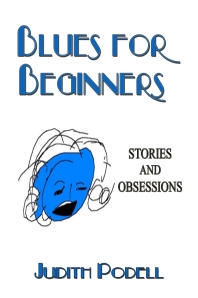 In preparation for the Virtual Book Tour, Memphis Earlene has graciously agreed to interview me.

Memphis Earlene:  Let’s start with your title, Judith.  No offence, but Blues for Beginners sounds like a self-help manual. What’s the connection between you and the blues.”

JP:  When I was 16 I taught myself how to play Cocaine Blues on the guitar after listening to a  Dave van Ronk record.   That was when the world started opening up to me.   The Sixties. Greenwich Village in the Early Seventies.   Years later some universal laws about the Blues were revealed to me and I wrote them all down.  It was kind of like Joseph Smith and the Angel Moroni, on a smaller scale, no offence.

Memphis Earlene:  You call yourself a comic writer, but you’re not David Sedaris funny.

JP:  (offended) So sorry to disappoint you.

Memphis Earlene:  What I mean is you write lots of lines that are LOL funny but your stories themselves are poignant and moving.  They’re more like real life blues, only with more punchlines.

JP:  These are stories about  searching for love and meaningful employment between 1963 and 1998.  Real life single woman blues.  A guy who was breaking up with me  compared my writing to TV sit com without a laugh track.   He didn’t mean it kindly but he may have been on to something.  Because  a situation comedy in real time with no laugh track, well that’s a good description of life.

JP: If I wanted to stick to the facts I’d write memoir, not stories.  I’ve never been in a fall out shelter, for instance, but I once went to an NRA reception.  And I did spend a lot of time in therapy. The old fashioned kind, psychoanalysis, where you lay down on a couch four times a week.

Memphis Earlene:  Aren’t you afraid of being accused of navel-gazing? Self-absorbed? Being whiney?

Memphis Earlene: You’re  sounding  a little defensive. Do you want to talk about it?

7 Responses to Blues for Beginners: The Book